Renovation Notice
Shoko Shuseikan Museum will be closed until October, 2024 for a full scale renovation. Sengan-en and the museum annex building are open as usual.
HOME > Learn > Kyokusui-no-en The event traces its roots back to China, where in the year 353 legendary calligrapher Wáng Xīzhī held the first Kyokusui event at the famous Orchid Pavilion.

Wáng Xīzhī wrote the following account of the day.

“In the ninth year of Yonghe, at the beginning of late spring, we have gathered at the Orchid Pavilion in the North of Kuaiji Mountain for a purification ritual. All the literati, the young and the old, have gathered here. This area has high mountains and steep hills, dense wood and slender bamboo, as well as a limpid flowing stream reflecting the surroundings. We sit by a winding stream with floating wine goblets. Although short of the company of music, the wine and poems are sufficient for us to exchange our feelings. As for this day, the sky is clear and the air is fresh; the mild breeze greets us.”

Forty-one people are said to have taken part in the event, and those not able to complete a poem in time were coerced to drink wine as a forfeit. The gathering at the Orchid Pavilion achieved legendary status in Chinese literature, and Wáng Xīzhī’s script describing the event is still used today in the Japanese school system as the basis for education in calligraphy.

The Kyokusui garden at Sengan-en is said to resemble the original at the Orchid Pavilion, with high wooded mountains rising at the rear of the garden, a bamboo grove, and fragrant plum blossoms. The style of the ceremony has undoubtedly changed a little since its introduction into Japan, but the essence remains the same. The Shimadzu clan seem to have taken particular interest in the event in the mid-1700s, resulting in the construction of not only the Kyokusui garden, but also the neighbouring Konan Bamboo Grove. 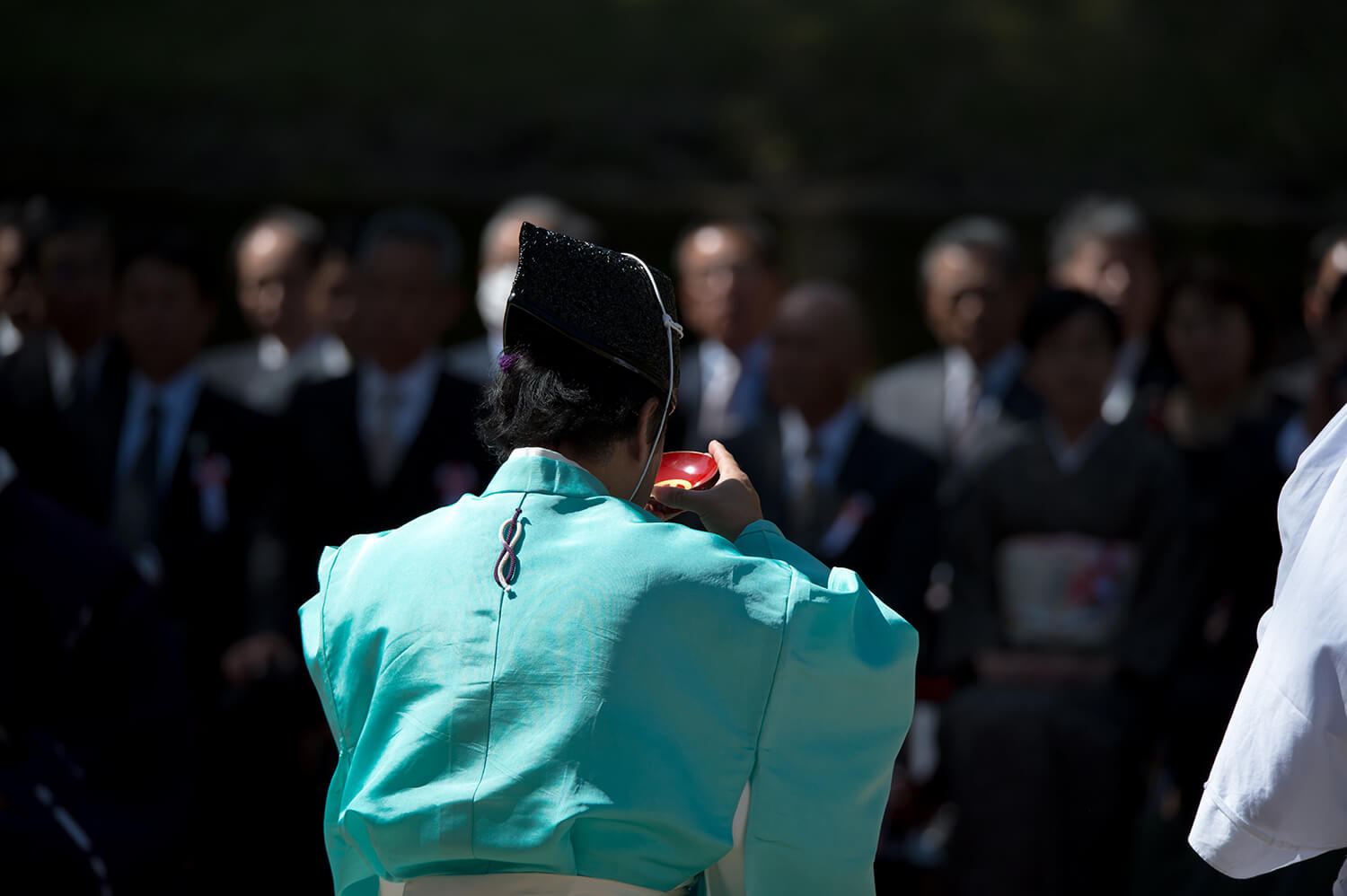 After a purification ritual for the participants, spectators, and the stream itself performed by a Shinto priest from Tsurugane Shrine, the cups are prepared and placed into the stream one by one.

Should the cups get stuck on their way down the stream, attendants are on hand ready to guide them on their way with a stick.

We use two kinds of uhai cups for Kyokusui-no-en at Sengan-en. The first is a traditional Chinese style porcelain cup called jibai (literally eared cup) with two handles which look a little like ears protruding out of the sides.

After drinking from these cups, the participants are inspired to write a poem based on the theme, mentioning recent events or hopes for the future, but also perhaps inspired by their surroundings and the season.

The second cup is a Japanese style sake saucer decorated with the Shimadzu family crest sitting on top of a wooden boat in the shape of a duck. These cups signal that the participants should start writing their poems. 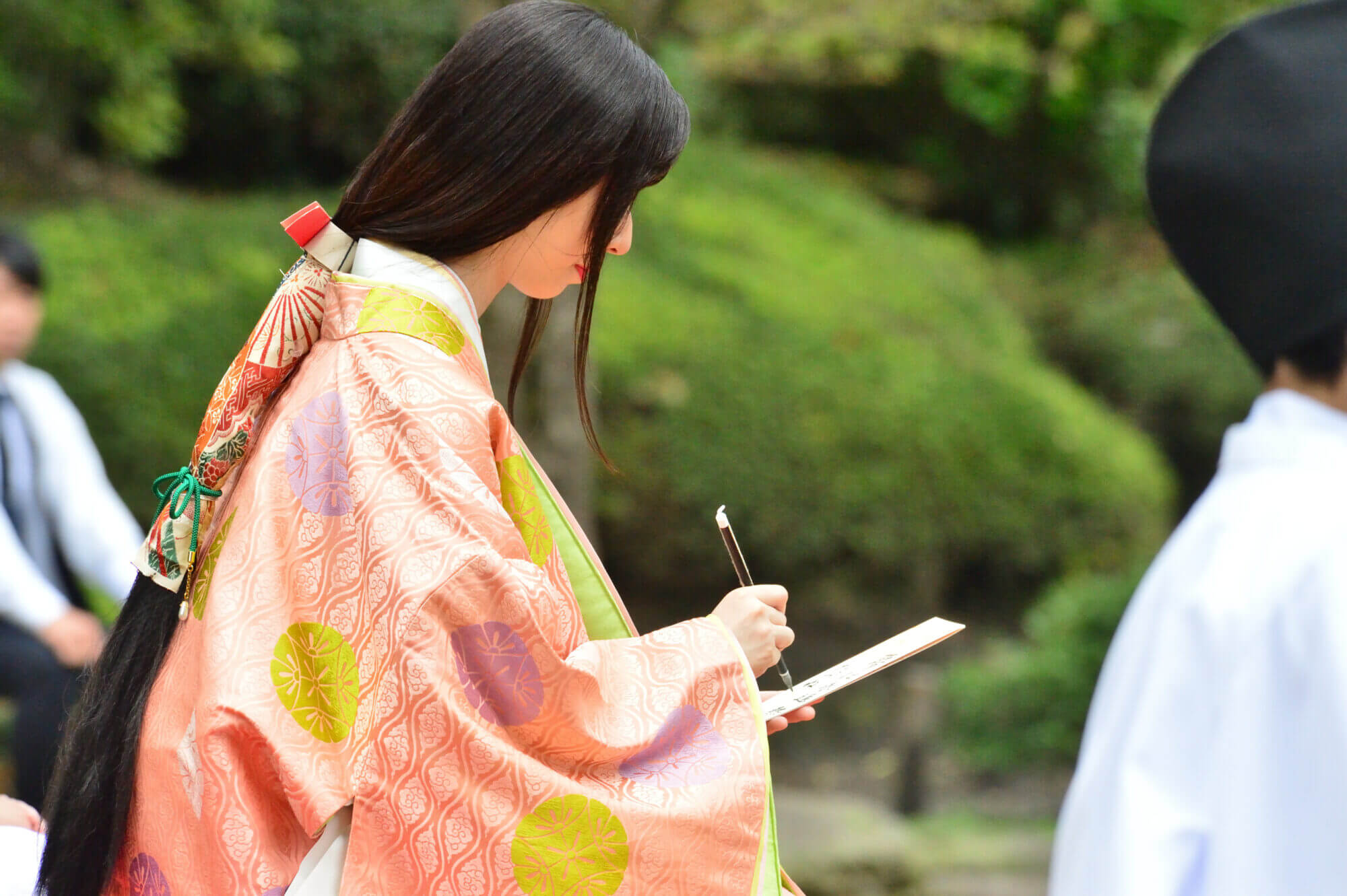 Poems are brushed onto a thin strip of paper called tanzaku using a small brush. The poem itself is a tanka, consisting of 5-7-5-7-7 syllables and generally tending towards more personal and emotional expression. This is quite different to the 5-7-5 haiku, which must feature a seasonal keyword and paint the picture of a particular scene related to said season.

A theme for the poems is decided in advance and presented to the participants on the day. The theme is usually a single kanji character, often related to the events of the year. 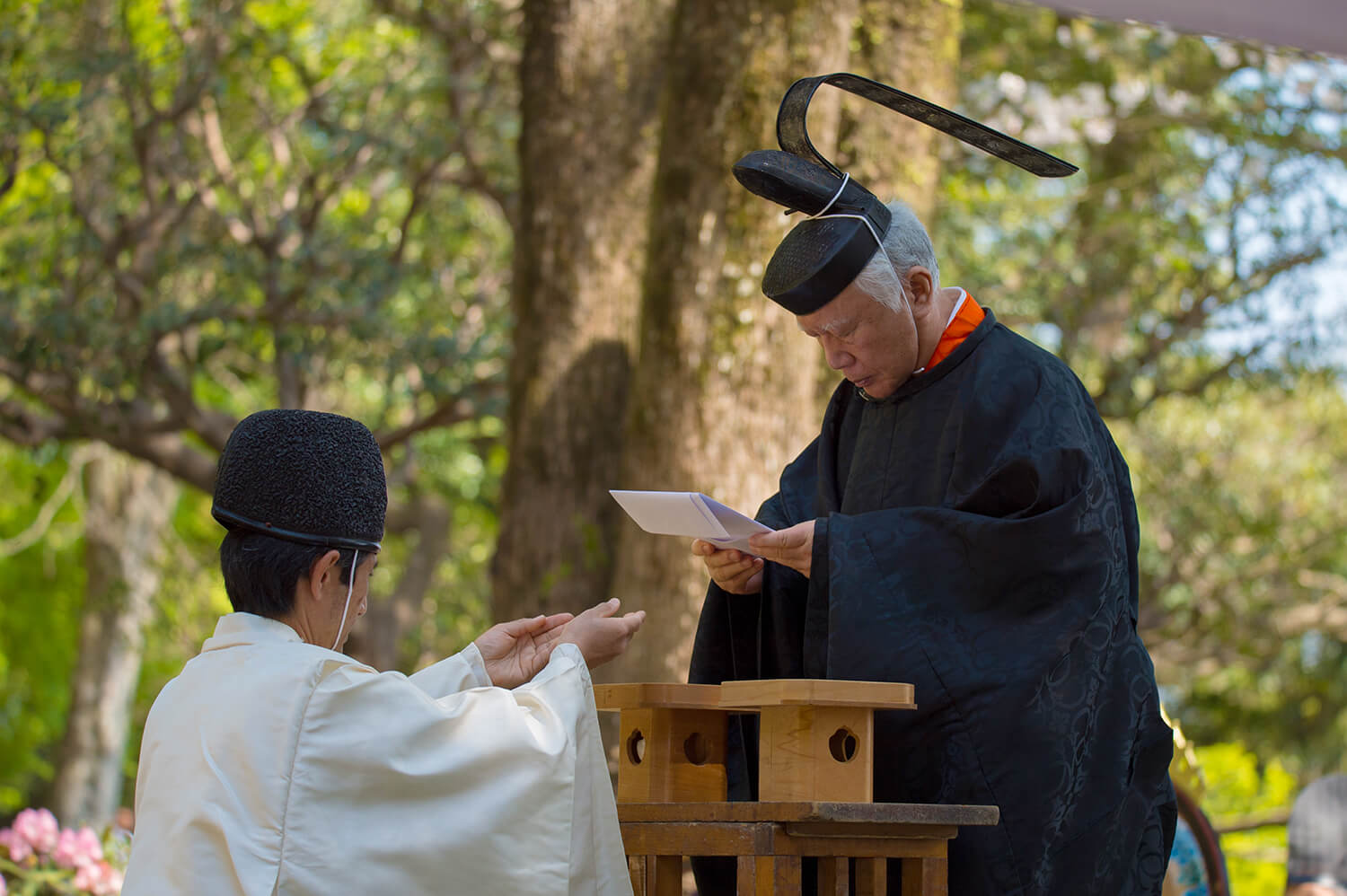 Once the poems have been finished, they are taken by attendants to the hiko, who reads each poem aloud to the audience. Each poem is read twice, once so that the poem can be clearly heard by the audience, and once more in a stylistic tone of voice.

With the drinks finished and poems written and read aloud the event draws to a close as the participants solemnly leave the Kyokusui garden.

Kyokusui-no-en is a rare chance to see the true culture of the samurai class still being practiced in modern Japan, and even without understanding the content of the poems is a visual spectacle that is a must see for visitors to Kagoshima in April.