The football-like game played by the aristocracy of ancient Japan 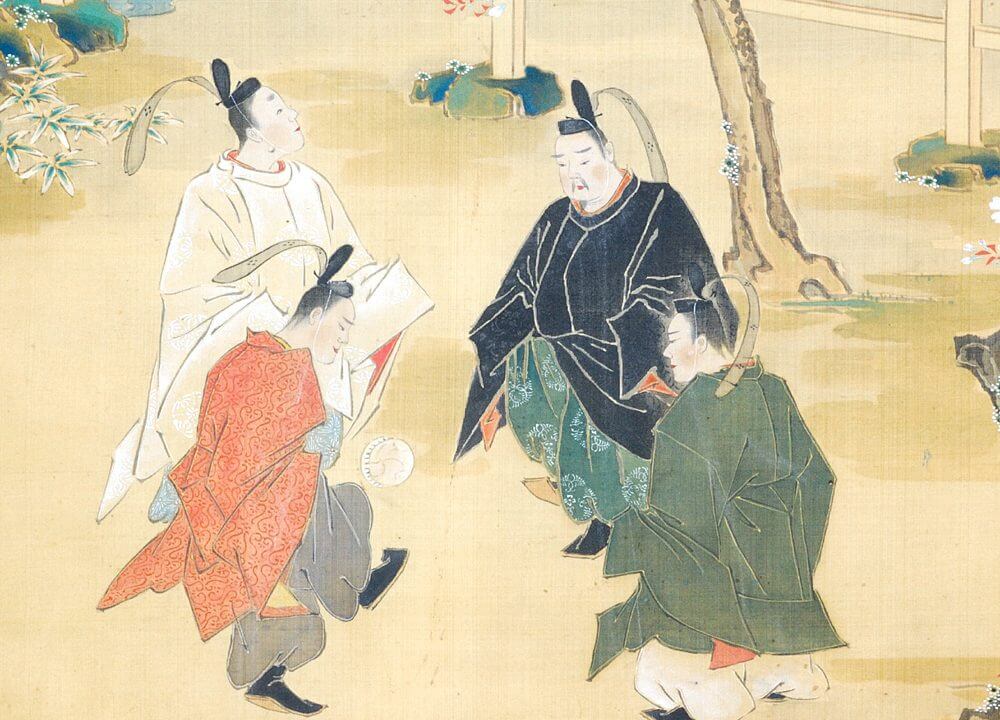 The image of the samurai as stoic warriors ready to throw their lives away in service of their lord is pervasive, but the samurai also needed recreation and time to relax. Among the many pastimes favoured by the samurai, kemari was perhaps the most similar to a modern day sport.

Kemari is a football like game in which players wearing wooden clogs cooperate to kick a leather ball into the air and prevent it from touching the ground. The first recorded instance of kemari appears in the Nihon Shoki, mentioning a game involving Prince Naka-no-Oe and Fujiwara-no-Kamatari. By the Heian period (794-1185) kemari had become a popular sport among court nobles. The Kamakura period (1185-1333) saw three houses responsible for the development of kemari, the Asukai, the Namba, and the Mikohidari. By the Muromachi period (1336-1573) the Asukai family were the sole progenitors of the sport.

The court for playing kemari is called a kakari. The kakari is square and covers an area of about 15 m2. Four trees mark the corners of the court with a cherry blossom in the north east, pine in the north west, willow in the south east, and a maple in the south west. The four trees at each corner can also be replaced with bamboo, and this is presently the most common form of court today.

4, 6, or 8 players called mariashi take part in the game, however in recent years 8 players has become the norm. Assistants to the mariashi called nobuse and referees called kensho assist with proceedings. The ball itself is called a mari and is made of inflated deerskin leather measuring around 18 cm in diameter. After a few test kicks called komari the player designated as ken (usually the kemari teacher or a high ranking official) begins the game.

Sliding footwork is used to manoeuvre around the court and players start moving on the right foot. Kicks are performed with the knees straight and the ball is struck using the base of the big toe on the right foot. When kicking the ball, the player cries out “ari!”, “ya!”, or “o!” in time with the kick. The ball is kicked about 3 or 4 meters into the air as this height is said to create the most pleasant sound and rotation of the ball in the air. Each player should ideally pass the ball onto another player within three kicks. Rather than being a competitive sport, kemari is more of a collaborative effort to keep the ball aloft. The game finishes when the ken delivers a final kick before rolling the ball into the centre of the court using his right hand. 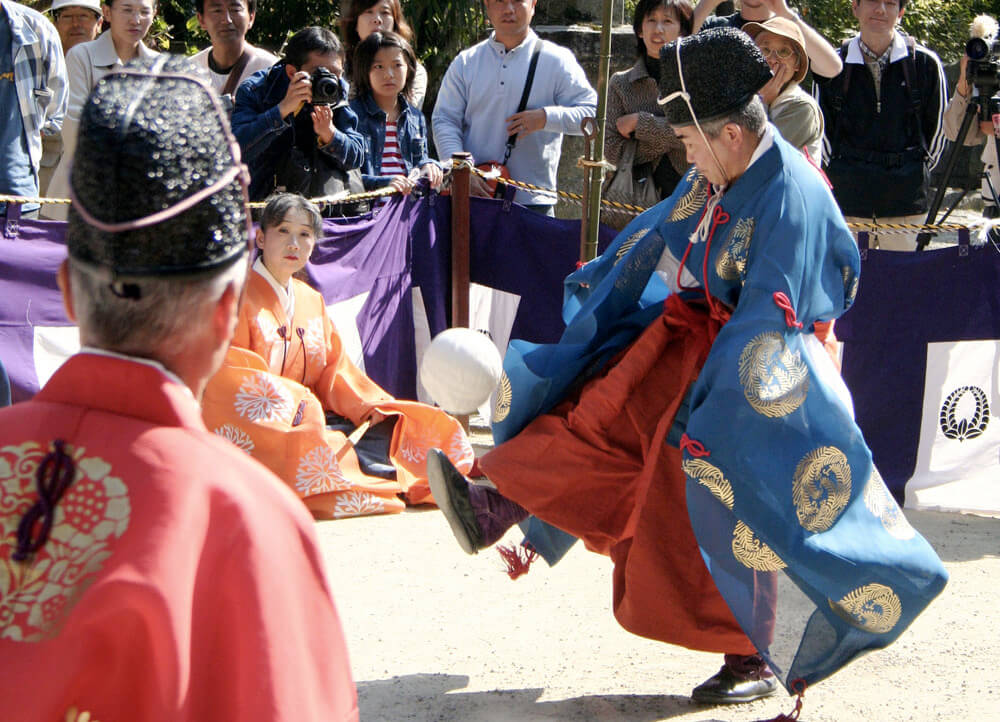 Kemari and the Shimadzu Family

Kemari appears several times as a pastime in the diary of Uwai Satokane. Satokane notes that young men would gather and play kemari, go, and other games after drinking sake. Similarly, late at night young samurai would enjoy kemari, poetry reading, incense and the tea ceremony among other cultural pursuits. We can see from this that kemari was viewed as a form of entertainment and fun as oppose to a rigid cultural activity.

There are also examples of kemari as a more formal pursuit in the Shimadzu family records, with the Shimadzu and their retainers being instructed in the how to play kemari by teachers from the Asukai family. Shimadzu Tadayoshi, the great rejuvenator of the Shimadzu clan after his quashing of the civil war between the various branches of the family in the Sengoku period, is said to have received a hakama and clogs from Asukai Yoritaka. Tadayoshi’s son Takahisa, known for being accepting St. Francisco Xavier in Japan, was trained in kemari by Asukai Masanori. Shimadzu Yoshihisa, who subjugated almost the entirety of Kyushu during the Sengoku period was also a direct student of Asukai Masatsune.

The retainers of the Shimadzu clan also received instruction in kemari along with their lord. Senior retainer Ijuin Tadamune learned kemari from the Asukai family at their request on a visit to the capital in Kyoto, receiving written documents from Asukai Masanobu for his trouble. Uwai Satokane then copied these documents over the course of a day, ensuring that the culture of Kyoto was passed on in Satsuma as well.

Perhaps the member of the Shimadzu family with the deepest connection to kemari was the 18th head of the family, Iehisa. Iehisa received a hakama and clogs from the Asukai family and acquired several formal licenses in kemari from Asukai Masatsugu in the early 1600s.

Iehisa was ordered to take part in the Japanese Invasion of Korea between 1596-1598. Before departing from Japan Iehisa and his men spent a month in Nagoya, and it is said they planted four trees to make a court and played kemari to pass the time.

Even after making the crossing to Korea it seems that Iehisa set up a court after a period of about five days and played kemari between battles. Shimadzu Yoshihiro, Toyohisa, and Tadanaga apparently visited the court during ceasefire to see the men playing kemari. It seems that Iehisa was a little too enamoured with kemari, and was cautioned by his father Yoshihiro for spending too much time playing the game instead of concentrating on strategy during the Korean campaign.

In the following years the Shimadzu family lost contact with the Asukai family, and kemari eventually fell out of practice in Satsuma by the late Edo period.